Page Design Group has been creating online versions of several print magazines for many years. But the gauntlet thrown down by the team at the UC Davis Graduate School of Management, led by Tim Akin, Marianne Skoczek and Lindsay Hardy, was daunting.

They showed us what some of their colleagues at other top MBA programs were doing. The designs were engaging. The artwork was dynamic. And the potential for interactivity with the reader was inspiring. We were primed for the challenge.

The design team was led by Tracy Titus, who has designed the print versions for many years. Mike Hendry, Page Design’s interactive guru designed the framework for the magazine. Mike applied the same bold image approach, which has made the printed Innovator a continual award winner, and took it a step further by adding animated graphics. Under Tracy’s direction, Mike, Brett, and Sara all worked to design intuitive, user-friendly layouts and motion-graphics for the features of the inaugural online issue. The art was finalized by Lindsay Hardy at GSM for placement on the GSM website.

The issue launched in late fall of 2014. On January 26, 2015 we received word that the issue was awarded a Silver Award from CASE District VII (Council for the Advancement and Support of Education). CASE received a tremendous number of total entries this year, over 470, so it was great for the Innovator to be recognized. We were all shocked to receive such a prestigious award so quickly after launching the first issue.

Beyond awards, the issue has been a tremendous success with GSM’s desired audience. Using the analytics that are available to online publications, data show that the site has received a large number of views, both from traditional computers and mobile devices. The users are staying on the site for extended periods and are sharing content via social media.

For the record, Page Design still misses the print version of Innovator. But the online version has been very rewarding and we are excitedly beginning work on the second issue for spring 2015.

While modern design trends are ever-evolving, consistently introducing new and creative ways to make a digital impact, there are a handful of elements that are considered the cornerstones of an effective website design. From delivering a memorable visual experience to making user navigation as intuitive as possible, these key elements… Read More »

SolTrans is a Joint Powers Authority that provides public transportation services to the southern Solano County cities of Vallejo and Benicia, California. Since 2011, they’ve served as a primary transit provider in the region, offering both local and fixed routes,… Read More » 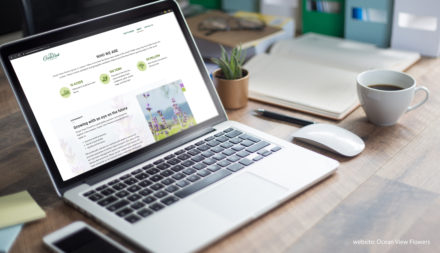 The Difference Between Web Design and Web Development

Few people consider the work that goes into creating an attractive, functional website – that is until they find themselves in need of one of their own. Behind every excellent website is a hard-working team of web designers and developers, the individuals who use their expertise (and considerable talents) to… Read More »